Must You Be Strapped to be Steampunk? 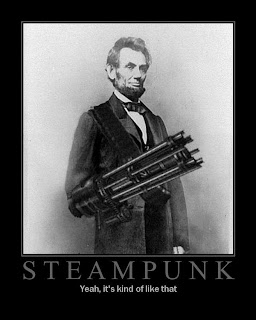 There's been a lot of heavy discussion in the Steampunk 'verse recently, particularly a big discussion/flame war on Steampunk Revolution about multiculturalism, white privilege, and the freedom to wear pith helmets.  Or something along those lines (after a couple of hundred posts, the original thread starts getting a little blurry). A friend of mine, hoping to lighten the mood at least on the local discussion pages, posted a photo showing "the lighter side of Steampunk" - Nerfpunk. 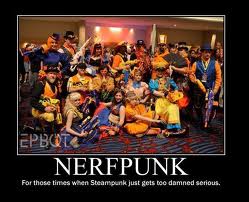 Nerfpunk is bright, sassy, and very, very colorful. The basic premise behind Nerfpunk is that instead of modding your Nerf gun and painting it in shades of copper, bronze and brown to match your Steampunk outfit, why not modify your Steampunk outfit in bright colors that match the original plastic of the Nerf gun? A charming idea, that translates into wildly colorful outfits that make a huge impact especially when there is a large group of folks all dressed in Nerfpunk. The photos on the Nerfpunk FB page are truly eye candy. These folks have obviously spent a lot of time, effort, and skill crafting their individual looks, and it looks fantastic. Lots of orange, yellow, blue, and green waistcoats, puffy skirts and corsets, and lots of smiling faces. The 'lighter side' indeed.

And all those guns.

Which is what I'm getting at - are the guns really necessary? I'm not getting down on Nerfpunks here.  I admire their creativity and enthusiasm. However, weapons, and guns especially (Nerf, ray, and otherwise) are way overdone in Steampunk. You can hardly swing a cat at a con without knocking someone's weapon out of their hand. Must you carry a gun in order to be truly Steampunk?  I understand that without the Nerf guns there would have been no springboard to create Nerfpunk, since the colors of the outfits are directly tied to the outrageous colors of the Nerf guns. But why are there so many Nerf guns in Steampunk- original, modded, or otherwise? Why are there so many guns and weapons, period?  It seems that nearly every Steampunk walking around a typical con does so with their trusty sidearm strapped at their side. I get that a lot of the 'personas' beloved by Steampunks are adventurers, explorers, airship pirates, etc., and presumably need to carry weapons for protection on their many adventures. I also see plenty of people just walking around in Victorian style outfits with rayguns on their belts for no discernible reason. 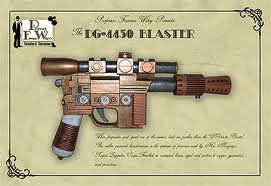 I am not anti-gun, nor am I a person who is seeking to curtail anyone's Second Amendment rights. I just wonder how many people have really thought about what adding a gun to their Steampunk outfit means. What does it signify to them?  Do they normally walk around carrying a gun in real life? Why does their persona (if they have one) need a gun? Or is it just another cool looking accessory, like goggles on a top hat? And what about all the 'gunplay'? I have seen too many pictures of Steampunks posing with guns drawn on one another, or equally bad, guns drawn and pointing at the camera.  As a very wise friend of mine pointed out, guns by themselves are inert lumps of metal. They are not inherently 'good' or 'bad', and only become dangerous once they are in the hands of a person. In my mind, a drawn and pointed gun implies violence. Sure, this is 'play', this is a make-believe Steampunk world, and we just want to have fun. But what is the message we are sending with our 'fun'? 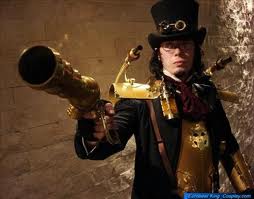 People who know and are serious about guns take guns seriously.  They know that guns are to be treated with respect, not brandished about willy-nilly. I have heard it said that if a person chooses to carry a gun for self-defense, they must be prepared to shoot to kill once they draw it. Ideally, a person carrying a gun should never have to draw it, except under the most dire circumstances. And should those circumstances arise, they must be prepared mentally, emotionally, and physically to use it. I personally don't think I would be able to do so. I don't carry a gun in real life, and I am not going to in the Steampunk world either. For me, walking around a con with a charming, shiny brass raygun on my hip would be advertising for some false bravado that  I don't possess. 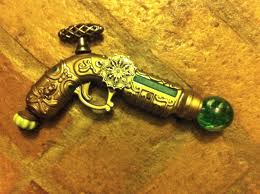 Yes, I've admired those little brass rayguns; they are amazing pieces of art, and so pretty to look at. I will admire yours when I see you at a con. I promise I am not trying to take it away from you. I choose not to carry a Steampunk weapon because it does not fit with my personal values.  My personal values and ethics don't magically disappear when I tie on a bustle and hit the convention floor.  I do not have a persona; I represent myself whether in Steampunk garb or out of it. I encourage others to thoughtfully consider why they wish to carry a Steampunk weapon.  I encourage them to think about what it says about their stance on violence in general.  Hopefully, they will make a decision based on their own values and beliefs, who they are as a person, and not simply to be following a trend. 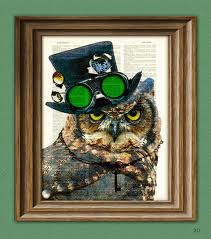