Here It Is - Another Steampunk Blog!! 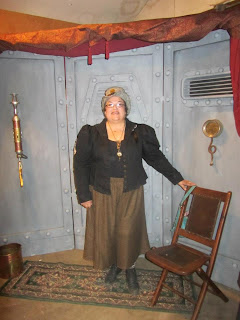 Yes my friends, this is another new venture for me. I'm barely computer literate, so even having got this far with a blog is a miracle for me.  I suppose things can only improve from here! Once I learn how to use all the features on here, I'll have a much prettier blog.  With pictures, I promise!

So why another Steampunk blog?  Because I need a little corner of the webiverse to call my own.  I need a place where I can be myself.  A place where I can express my opinions without censorship.  Mostly a place to gather my thoughts and try to express them coherently.  It's a start - I figure practice makes perfect! Yeah, I've got a ton of bad habits - I overuse commas and exclamation points like there's no tomorrow, split infinitives from time to time, tend towards overly long sentences, and commit more grammar violations than I can think of right now.  This is not the place for clean writing.  This is my stream-of-conciousness place, where I can go on a rant and get it out at once, kind of like coughing up a hairball. Yes, it's true that I have a B.A. degree in English Literature, but please don't hold that against me!

So where is the Steampunk part of this, you may be asking yourself right about now.  My topics won't always be purely about Steampunk.  But Steampunk is a big part of who I am and what I love, so I expect it to pop up often.  I'm one of those nerds who has been somewhat Steampunkish all my life.  I'm old enough to remember Wild, Wild West when it was a first-run television show.  Movies like Chitty Chitty Bang Bang, Mary Poppins, 20,000 Leagues Under the Sea, and The Seven Faces of Dr. Lao all informed my childhood. Dr. Doolittle and The Borrowers were favorite book series of mine, and I longed to live a Victorian childhood (never mind that I probably wouldn't have survived past age eight, but I digress).  When Steampunk started to become more well known in  geek culture, around 2007 or so, I dived in and have never looked back.

A lot has happened since then.  I attended meetups with other Steampunks.  I started a Steampunk group in Portland, OR, got kicked out of my own group, and started another Steampunk group with a good friend.  I attended cons, spoke on panels, held tea parties, marched in parades, dressed up, got photographed, got interviewed, was a moderator in a couple of online Steampunk groups, sewed clothes, made hats, made jewelry, made  friends, made enemies, and was praised, criticized, thanked, vilified and ignored by my fellow Steampunks.  I made passionate love to, and broke up with Steampunk numerous times in the past six years. But damn, I can't seem to quit Steampunk.

So dear Reader, if you choose to bear with me, these are the topics I'll be talking about here.  My experience with the Steampunk community has been very much a mixed bag.  I have seen the humor, creativity, intelligence, open-mindedness, and impeccable manners and courtesy that the Steampunk community is famous for.  I have also seen the ugly, all too human underbelly of Steampunk- the narcissism, hypocrisy, grasping for power and need to control that humans can't seem to get away from.  It might not always be pretty, but I will always write about Steampunk as I see it.

Now for something completely different -  here is a picture of an adorable kitten. 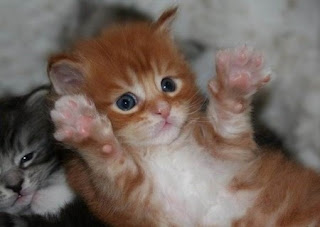